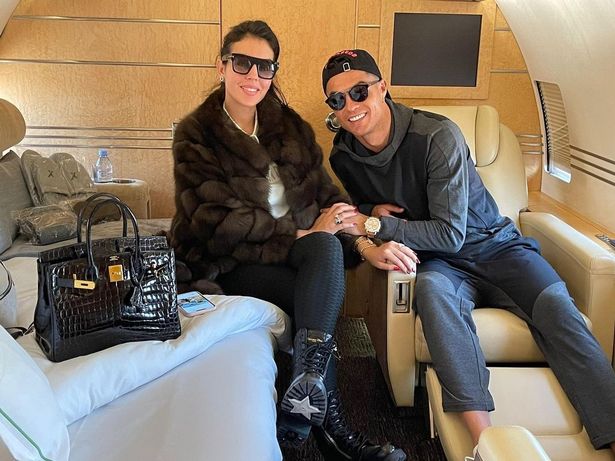 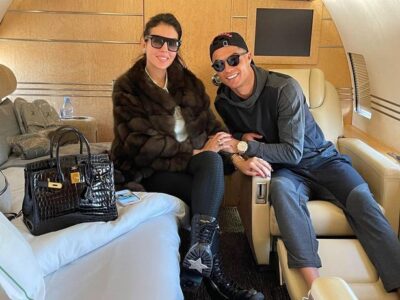 The 36-year-old dad-of-four spent thousands lighting up Dubai’s skyline with images from her new Netflix show.

He posted a video, showing the stunning Spaniard’s face on the facade of the famous Burj Khalifa tower, on his IG.

The light and laser show included one moment when Georgina’s name flashed up in neon on the tower.

It ended with the message ‘Happy Birthday Geo’ in giant white letters above a photo of the stunning Spaniard in a glamorous off-the-shoulder black dress.

The voice of a woman thought to be Georgina could be overheard in the background in the video Cristiano posted, as well as that of a little girl believed to be the footballer’s four-year-old daughter Eva or the couple’s little girl Alana Martina, also four.

One fan even went as far as hinting on Cristiano’s Instagram that Georgina and her soccer star partner might end up marrying in Dubai after seeing the spectacular footage.

Cristiano, enjoying a break from the busy footballing calendar with his four children, wrote in Portuguese alongside the spectacular video footage: “Many congratulations my love” adding heart and birthday cake emojis.

The Burj Khalifa light and laser show, on the edge of the Burj Lake, is a massive draw in the luxury Middle East sunshine destination.

The iconic tower becomes the biggest display screen in the world at night-time thanks to nearly 18 miles of cables, 1.1 million pixels and 118 tons of light beams and accessories.

Recent reports put the cost of placing a three-minute promotional ad or message on the tower’s facade at a minimum of £50,000, with the price rising at weekends.

Cristiano, owner of a £20 million private jet and a fleet of expensive sport cars, can easily manage it with a net worth estimated at around £373 million.

The Man United hero is today celebrating the premiere of the Netflix series about Georgina’s rags-to-riches life, titled I Am Georgina, as well as her 28th birthday.

Argentinian-born Georgina, also believed to be in Dubai although she hasn’t yet updated her social media to confirm it, says in the six-part docu-series that travelling on Cristiano’s private jet has put her off jumping on a normal plane with her footballer partner.

The brunette beauty, a £10-an-hour shop worker when she met the Man United striker in 2016 while he was still with Real Madrid, whizzes around Europe on his Gulfstream G20 plane.

It is capable of reaching a top speed of 560mph and its range is up to 3,910 miles with four passengers in tow, so it’s ideal for quick flights from the footballer’s new base in England to hubs around Europe.

Georgina took it to Lapland before Christmas so Cristiano’s four children including their daughter Alana Martina could see Santa.

She admitted on her new Netflix show: “To me the best part of travelling in Cris’s jet is its crew, no doubt and the jet does really make life much easier.”

Speaking as she boarded the plane to Paris to choose an outfit for the Cannes Film Festival at Jean Paul Gaultier’s studio, she added: “If I had to be in an airport for two hours with Cristiano I’d go insane. I mean I couldn’t go, I’d rather not travel.”

Georgina also revealed in the show she went from taking public transport to get to the Gucci store where she met Cristiano in 2016 to being ferried around in his fleet of high-powered sports cars.

The model and influencer, who grew up in the Spanish Pyrenees city of Jaca, said: “Many times he’d come after work and I’d get out after 10 at night.

Cristiano, who also features in the show and admits he rapidly realised “Georgina was the woman of my life”, added: “To me it was ‘normal’ so to speak because she was already my girlfriend.

“I know the cars I have and I’m not going to pick her up in a taxi.

“It was funny because I would wait for her outside the store in these flashy cars I have.

“Georgina’s really good in that sense. She would leave the store quickly, get in the car and we’d go home.”

Confessing it wasn’t love at first sight with his long-term partner, who raises their four-year-old Alana Martina and his three children as if they were all her own and is currently five-months pregnant with twins, he added: “I didn’t think at the beginning it would be this strong and I would fall in love with her.

“I didn’t expect it honestly. But after a while I felt she was the one for me.”

Georgia confirmed she was also in Dubai late today by posting pictures of her arriving at a red rose-laden table on the beach decorated against a backdrop of red and black balloons and the number 28 in gold.

The footage she uploaded approaching the table showed she appeared to be suffering slightly as she walked because of the heat and her five-month pregnancy.

She was with Cristiano’s twins Eva and Mateo and their daughter Alana Martina, all four years old.

The birthday girl also showed off some of the presents she had received from Netflix.

* I Am Georgina – Soy Georgina in its original title in Spanish – is streaming in 190 countries.

India vs Pakistan In Asia Cup 2022