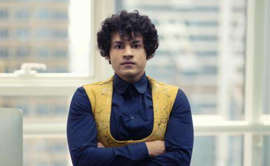 Bollywood stars and cricket celebrities have signed up with one of the first companies in the world to create a personalised digital Non-fungible Tokens (NFTs) museum of leading personalities.

Abhay Agarwal, the Dubai-based founder and Chief Executive Officer (CEO) of Colexion, said top players and film actors are making a beeline to sign up with his firm.

“Our goal is to become the largest digital collectible gallery in entertainment, lifestyle, sports and art,” said Agarwal. “We’ve the best combination of fan engagement and art collection in place. We’ll bring more eyes to the national sport of India and start major leagues around it to promote and create more awareness,” he added.

Agarwal said there is a growing appetite for NFTs in India.

“The primary target are the 500 million-plus Indians in the 18-24 age group, who spend an average of 8.5 hours daily in online gaming,” he said. Of course, communication will not be a problem as the platform will be able to coordinate with them in a wide range of languages; not necessarily only English or Hindi.

Agarwal, 33, who considers Dubai as his second home, said he has been active in the NFT space for the past 30 months. “And every day we are now signing new cricketers and actors,” he pointed out.

In January, Agarwal started Colexion, and he is aiming to be a market leader in the licenced NFTs space soon.

In July, the company announced a pre-series A funding of $8 (Dh29.38) million to support its growth in new markets. Agarwal says that his aim is to ensure that Colexion will have the biggest digital art collection in the world, creating a unique community of creators, collectors and celebrities.

It has also signed agreements with Matrix Fight Night (MFN) fight club, which is owned by Tiger Shroff and his sister Krishna and with the All Stars Football Club.

Agarwal cited that buying, selling and trading of NFTs is gaining popularity around the globe, especially relating to memorabilia of film stars, including Bollywood, digital art of cricket legends and entertainment collectibles.

Colexion will create a personalised digital museum for the celebrities and a multi-verse gaming platform will be accessible for users to play and earn.

NFTs are data stored in a digital ledger (blockchain), which are sold and traded on digital markets. Its identity and ownership are verifiable from the ledger.

Agarwal pointed out that NFTs have gained popularity in the US and Europe and are doing likewise in the Arabian Gulf, India and even in other parts of Asia.

“There has been a massive response from all these geographies,” he said.

However, it’s difficult to educate people on buying digital art, but his firm has been making significant inroads.

The target audience for him is the 15 million-plus, cryptocurrency users in the 25 to 40 years age group and half a million people in the 20-25 years age category using fan interaction platforms in India.

His native country is also home to over half a billion youth.

“The NFT market cap is worth $40 (Dh147) billion,” said Agarwal. ” Colexion will ensure NFTs are accessible to everyone in the world. We will be curating some interesting categories and add-on features for engagement on the platform,” he added.

Bibin Babu, co-founder and Chief Operating Officer (COO, Colexion, said the company is in the midst of producing a biography of the players and athletes to unfold their stories to fans in a unique format.

“Fans can also interact with their idols via the live webinars and events, which we will be hosting on the Colexion platform,” said Babu, a serial entrepreneur and a blockchain expert.

Colexion has also applied for a patent and is looking for sponsors from companies manufacturing electronic appliances, luxury cars, fashion brands and beverages.

In pictures: Time Out Dubai turns 20 at Float Dubai

Sneaker hub amongst few kicks off shoe laundry service Fix up your footwear By Keyta HawkinsNovember 23, 2021