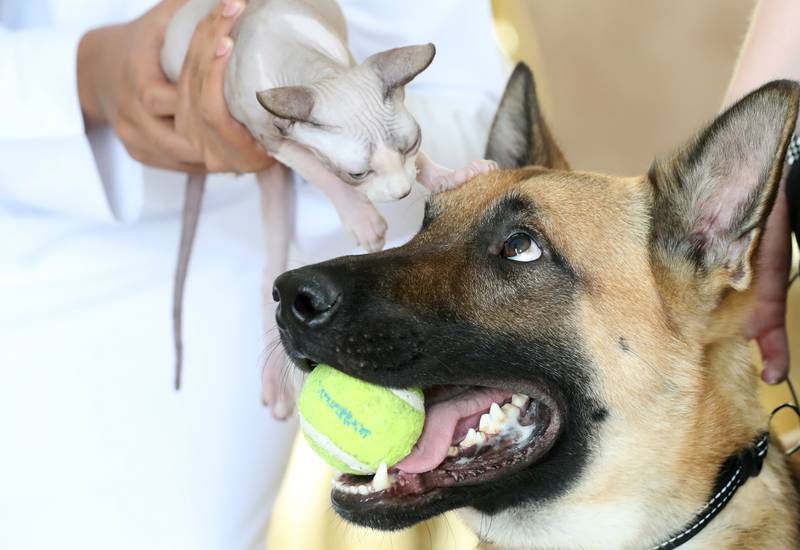 The K9 team at Dubai Police are looking for homes for their retired bomb-sniffing dogs.

The animals on the adoption list have retired from active police duties or were unable to meet the demands of police work.

Until 2019, such dogs stayed with their handlers but since last year members of the public have been allowed to adopt police dogs that have been trained in patrol and narcotics detection and can even

So far, six have been rehomed while another six are on the waiting list.

We filter the applications to choose properly and ensure the dogs are sent to families that will really care for them.
Maj Salah Al Mazrooei, director of Dubai Police Security Inspection K9 Unit

Applications are open but there is a strict procedure before families are shortlisted and chosen to adopt a dog.

“We filter the applications to choose properly and ensure the dogs are sent to families that will really care for them,” said Maj Salah Al Mazrooei, director of Dubai Police Security Inspection K9 Unit.

“They must have a spacious home, know how to deal with dogs and that they allow us to visit on inspections.”

Dubai resident Tene Saarva, from Estonia, took one dog home. She said she always wanted a German shepherd but was more interested in adopting than buying.

“After I saw the announcement, I got in touch with the police. I wanted to adopt, not shop for a dog,” said Ms Saarva, 31, who lives in Dubai’s Al Barsha area with her Emirati husband and their six children.

She met Denny, a two-year-old German shepherd, before starting the application process.

She said there are many conditions to adopt – pledging not to sell or give away the dog, ensure it will not be harmed and will be given a good and safe home.

“It also mandates that police are allowed to come to our home to inspect,” she said.

Her children and step-children were very excited when Denny arrived, and even happier because he does not bite or bark but wants to play all the time.

“He is very active and very friendly with the children. They are bringing down the house but it’s fine, the children would have done it anyway,” Ms Saarva said.

She said Denny gets along with their three cats – Gucci, Daemon and Snowy.

“He loves Daemon, my sphinx cat, and the two others and never chases them,” said Abdulaziz Al Marzooqi, 14, Ms Saarva’s stepson.

Abdulaziz said he is more of a cat person but also loves dogs.

Since taking Denny home, the family have been asked to send pictures and videos of him to the police and update them on how the pet is settling in his new home.

In the past three years, 41 retired police dogs were given away to their handlers and other police officers.

The unit gets new dogs each year as old ones are rehomed. Currently, there are 82 dogs at the unit, including 12 new arrivals that joined this year.

They are different breeds such as Malinois, German shepherds, labradors, springer spaniels and cocker spaniels.

“We wanted dogs to cover the security of Dubai Expo 2020 site but not in a way that would affect our presence at other places, so we added 12 dogs this year,” Maj Al Mazrooei said.

Van Cleaf, a police dog, aged 8, with his handler Noura Yaqoub, a first corporal officer. Currently, there are 82 dogs at the Dubai Police K9 unit, including 12 new ones that joined this year. All photos by Chris Whiteoak / The National

The country’s first police veterinary surgeon, Second Lt Maryam Beljafflah, 25, who began her role at the unit last year, said she hopes the six retired dogs on the waiting list also get a good home soon.

Ms Beljafflah is one of three vets at the unit and will soon be joined by a nurse.

Vaclav, an eight-year-old Labrador, is one of the dogs up for adoption.

“He is very excited all the time,” she said as she patted and calmed him down.

“Our dogs retire when they grow old or do not perform up to the mark during training. Internationally, if a dog is above 8 or 9 years he is usually relieved from active duty.”

Two of the six retired dogs on the list are being sent to new homes because of low performance, she said.

“They passed obedience training but unfortunately didn’t do well when it came to the specialised training.”

The K9 unit was established in 1976 with six dogs but grew over the years.

In 2018, it was moved to the General Department for Protective Security and Emergency.

“We now have 55 instructors, including six Emirati women. Each is assigned to work with a number of dogs,” Maj Al Mazrooei said.

When hiring new instructors, Maj Al Mazrooei said he looks for many skills but previous experience and a passion for working with dogs are the most important.

“After new instructors join, they undergo intermediate and advanced training courses,” he said.

Be Our Guest” campaign launched for Malls in Northern Emirates