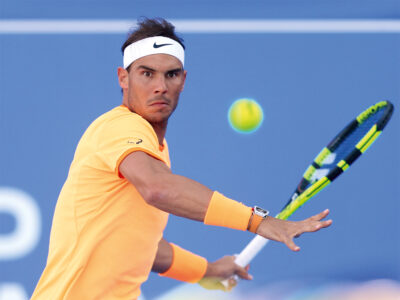 By Zoe Patterson November 4, 2021
Calling all tennis fans and sporting enthusiasts. Are you as hyped about the Mubadala World Tennis Championship coming to Abu Dhabi as we are? With so many cool sporting events and activities in Abu Dhabi, we’re feeling fit just thinking about it.

Now we have one more reason to get excited, with record-holding tennis champion, Rafael Nadal, is returning to Abu Dhabi to join the championship in December. Game, set, match.

Nadal is looking to defend his title and make it six victories at the Arabian Gulf’s leading professional tennis competition. He is the joint record holder of most male Grand Slam titles and will be making his 11th appearance at the championship.

His confirmation means two of the world’s top ten male players will be competing. He’ll be joining Casper Ruud, Dominic Thiem, and Denis Shapovalov in a series of elimination matches at the International Tennis Centre at Zayed Sports City from Thursday, December 16 to Saturday, December 18.

They will be joined by US Open women’s champion, Emma Raducanu, who will be taking on Tokyo Olympics gold medal winner Belinda Bencic.

Sounds like an ace to us. We can’t wait.

Qatar adds 6 countries to red list including UK and UAE