14 of the UAE’s most intriguing roundabouts, from sharks to eagles 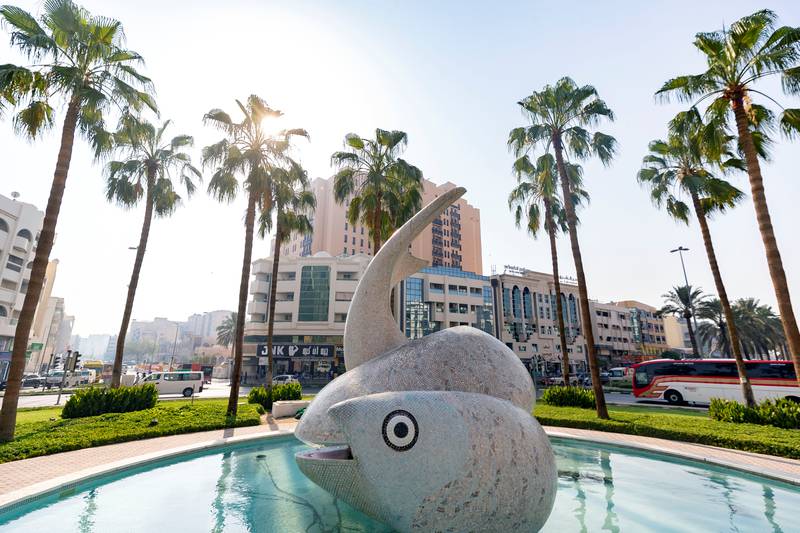 Sharks in Fujairah, oysters in Ras Al Khaimah and a in Dubai — welcome to the weird and wonderful world of UAE roundabouts.

These photographs from The National’s Chris Whiteoak were shot while on assignment across the country over the past few years and show some of the many roundabouts that enrich our travels on the country’s roads.

Like all structures in the UAE, they have a story to tell. The sailfish that soars from an Umm Al Quwain roundabout is a nod to the emirate’s maritime tradition, a hurricane lamp in Dibba shows how the humble paraffin lamp gave light and solace in a time before electricity, while Dubai’s Clock Tower signalled the city’s ambitions when it was built in the 1960s.

Modern roundabouts first appeared in the US and France, but they could be confusing. British traffic engineers, including Frank Blackmore, simplified them in the 1960s. Mandatory “give way” rules were introduced and the roundabout as we know it today was born.

They then spread across the world and in Dubai, roundabouts were part of the first town plan devised in 1960 by the British architect John Harris. “There were no designed road networks before 1960,” said Todd Reisz, author of Showpiece City: How Architecture Made Dubai. “That year brought its first asphalt road and the first formal roundabout was May, 1960.”

A few years later, Dubai was home to as many as eight roundabouts and they were incorporated into new roads created by Halcrow, the engineering company undertaking the development work that was transforming the emirate.

For years the roundabouts remain unadorned — circular empty sandy knolls without even grass on them — but Dubai Municipality had larger plans to green the city and create fountains as a way of signifying beauty, progress and advancement.

“The fish roundabout in Deira was the first to be landscaped,” said Mr Reisz. “That was there since the 1960s. It was located near Al Maktoum Hospital, which was a highlighted development and where the network of older roads was stitched together with the new roads of the 1960s plan. It was seen as a crucial roundabout.”

When the sculptures were added is harder to quantify but, according to Mr Reisz, the fish sculpture in Deira was up no later than 1972.

As the country developed in the years after unification, new roads were built and with them came the distinctive roundabouts we know today. From the equine-inspired roundabouts of Al Ain to Ras Al Khaimah’s oysters which champion its pearl-diving heritage, the fame of the UAE’s roundabouts has spread far and wide.

Kevin Beresford, president of the UK Roundabout Appreciation Society, published a calendar, in 2003, about the quirky world of the UK’s roundabouts that went viral and sold tens of thousands of copies worldwide. He has since published another on international roundabouts and even car parks.

“It went like a firework,” said Mr Beresford, about the original calendar. “This got me interested in roundabouts as pieces of architecture. We have long been interested in the UAE as the roundabouts there quite spectacular. We found the UAE roundabouts such as the sharks [in Fujairah] one fascinating and really quirky.”

What makes a good roundabout? First, according to Mr Beresford, it has to work properly. But then the centre circles are a blank canvas to reflect a local industry, artists or a region’s heritage and culture.

“We see them as an oasis on a sea of asphalt,” said Mr Beresford, who is the self-styled “lord of the rings”.

“There are three Spitfires on a roundabout in Birmingham to reflect how they were built there. One can have trains, boats or planes — you name it.”

Some renowned UAE roundabouts have disappeared over the years: victims of development and the emergence of flyovers. The Falcon Roundabout, close to Mina Rashid in Dubai, has long departed, while the Ramada roundabout — which took its name from the — has also gone. But many others endure.

“We would like to see these old roundabouts preserved,” said Mr Beresford. “The older ones seem even better than the new ones and they capture the essence of the area. They should be preserved and definitely not replaced by lights.”

Mr Beresford’s organisation chooses a roundabout of the year. Last year one in the Australian capital, Canberra, took the honours. Could the UAE be a contender?

“We really want to pick one in the Middle East,” said Mr Beresford. “We have been discussing this for some years. The Middle East roundabouts captured the attention of our committee. They are beautiful with clever design